General Motors' Electro Motive Division uses Cambridge viscometers on their latest H-series 6000 horsepower engines to monitor fuel dilution and other characteristics of their lube oil real time. In addition to GM, Ferrari, Lubrizol, Equilon, Tecumseh, the US Navy, US Army and a number of others have found Cambridge viscometers ideal for monitoring lubrication and hydraulic oils to monitor oil health and predict failures. Cambridge viscometers are fundamentally simple, rugged, accurate and repeatable despite operating environments with significant vibration. A key to the company’s technology is its use of a single, non-contact moving part both to clean and measure. The motion of the piston is controlled so that it monitors the fluid viscosity and keeps the sensor’s measurement chamber clean, so that the sensor requires minimum operator attention. A temperature detector is also included in the measurement chamber so that both temperature and viscosity are known for every measurement. The company’s patented self-cleaning characteristic enables the Cambridge sensors to operate trouble-free in-line and on-engine. 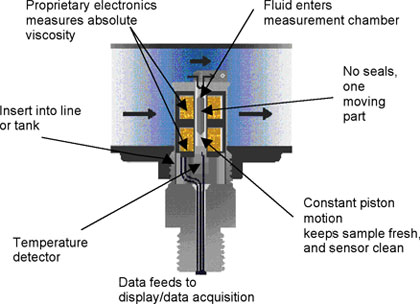 Exhibit 2: A schematic of a Cambridge sensor operating in-line

Cambridge Viscosity, Inc. viscometers use proprietary circuitry to analyze the piston’s travel time to measure absolute viscosity and monitor temperature. With all wetted parts stainless steel, the constant motion of the piston keeps the measurement sample fresh while mechanically scrubbing the measurement chamber. Cambridge has more than 7,000 sensors installed worldwide in many applications where viscosity knowledge and management is critical. A schematic of the operating characteristics of a typical Cambridge viscometer sensor is shown in Exhibit 2. 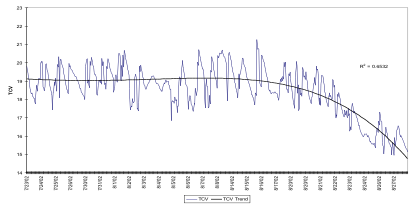 A standard on-engine mounting location for the Cambridge viscometer is in the lubrication oil return line. Exhibit 3 shows the results on one such engine. As you can see, even with temperature compensation, the viscosity varies roughly +/- 1 cP around its trend line of 19.2 cP. This trend line begins to drop around 8/14/02. The trend clearly continues down, crossing 18 cP in 4 days and almost 2 weeks to drop to 15 cP. The engine continued to failure due to fuel dilution.

The viscosity data shown in Exhibit 3 indicates the detection of a fuel leak more than a week before it became a serious problem. The data shows a maximum 20% drop in viscosity which correlated to about 6% fuel dilution (engines in the type tested typically are designed to run with up to a 4% dilution. In this case, notifying the operator of the problem could have easily avoided the catastrophic failure which occurred.

Exhibit 4 shows real-time viscosity trending in the lubrication oil on a different engine. This engine was being tested to track failure by lubricant breakdown. The long term trend in temperature-compensated viscosity had been above 5 cP. After sustained operation, the lubricant additive package began to fail, and the viscosity dropped, indicating permanent shear-thinning. This failure allowed the oxidation of the oil to increase to the point that the viscosity begins to trend up, prior to predictable engine failure.

This exhibit highlights two factors. When oil conditions deteriorate significantly, failure modes can mask one another. Prior to the problems becoming extreme, however, viscosity trending allows problems to be identified at an early enough stage so that it can be highlighted as such and proper maintenance can be scheduled prior to failure.

The installation of Cambridge sensors on-engine is simple. They are typically mounted just downstream of the oil filter or in the oil filter assembly, with the electronics driven from the vehicle’s on-board power. This allows simple retrofit of existing vehicles or design in for new vehicles.

Viscosity is a real indicator of oil health. Real-time dynamic viscosity measurements and trending can provide an early warning of oil and equipment failures. This information can be used for immediate problem solving or highlight the need for more detailed lab analysis to clarify the situation further so that the problem can be solved on an appropriate maintenance schedule rather than one caused by catastrophic failure.

This paper, written by Rob Kasameyer and Curt Felix of Cambridge Viscosity, demonstrates how real-time oil viscosity measurement and trending can identify lubricant problems well before they cause equipment damage or failure.