DBR Technology Center, a division of Schlumberger Canada Limited, provides quality phase behavior and other forms of analysis on petroleum hydrocarbon fluids. One of the key attributes that the company’s engineers need to measure under high-pressure and controlled temperature conditions is viscosity. The company had developed its own measurement system, a huge machine that consumed half the floor space of a typical conference room, and had traditionally used it to conduct the measurements.

This work ultimately led to the development of the Cambridge Viscosity 440 sensor, which offers a tenfold improvement in accuracy over other high-pressure sensors, requires a very small sample size (<2ml), and is self-cleaning, thereby offering both high reliability and low maintenance.

“Through the course of our relationship with Cambridge Viscosity, we have asked them to innovate on our behalf and they have done so many times,” says Jatinder Kalra, manufacturing manager at DBR. “The 440 was the first major advance, and it continues to be an integral part of our fluid behavior laboratory package.”

From DBR DIY to CV PVT

In 2005, DBR came to Cambridge Viscosity with a significant request: to create a full PVT (Pressure Volume Temperature) system to meet DBR’s needs and specifications. Cambridge Viscosity’s expert engineers developed the VISCOlab PVT Airbath. A fraction of the size of DBR’s home-grown solution, the Airbath uses a simple three-valve plumbing configuration to control sample flow. Pressure is monitored with a digital pressure gauge, and temperature is controlled with an isothermal oven. This Airbath system was designed to require only 10-15 ml of fluid (including cleaning) and heat up to the desired temperature in 4-6 hours. It is now successfully being used by a variety of industry labs. 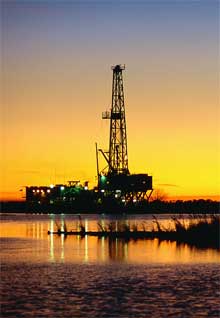 s Over the course of a 15-year relationship, Cambridge Viscosity has worked closely with Schlumberger-DBR Technology to develop PVT viscosity measurement systems that enable DBR to efficiently, cost-effectively, and accurately test oil sales, even in remote field locations.